A "SMOKESTACK"
ON THE MOON?

This is a recreation of a 2006 report from Joshua P. Warren & his L.E.M.U.R. Team.
For the original page, see:
http://shadowboxent.brinkster.net/moon/esjmoon.html

The L.E.M.U.R. team stirred enormous interest by presenting images from the August, 2003 issue of Electric Space Craft, a scientific journal.

The publication contained an amazing series of frames taken from NASA imagery included in the TV program, NOVA: To the Moon. The significance of the images had only recently been noticed.

As Apollo 8 orbited 70 miles above the lunar surface, with Earth in the background, it took images of the ground below. 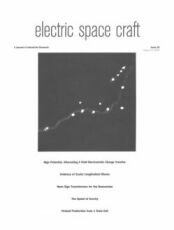 At one point in the NOVA program, a small, black object, tall and cylindrical, appears to be jutting from the moon.

Just as it looks like the camera is about to pass by, the strange object seems to release a jet-like cloud. It can be described as appearing like a smokestack ejecting a puff of smoke.

The "cloud" drifts to the right and then dissipates. Though the black object appears small on the screen, it would have to be hundreds or thousands of feet tall if it were indeed seen from such a high altitude.

Included below are the black and white stills used in the Electric Space Craft issue.

We have also assembled these into an animated gif that reproduces the NOVA footage.

The black and white stills are frames from the footage, posted in order from left to right. 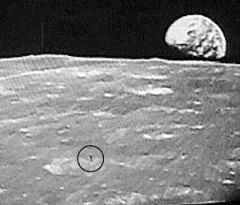 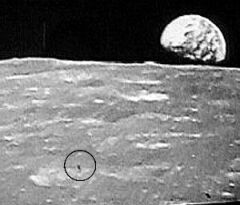 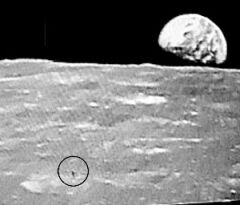 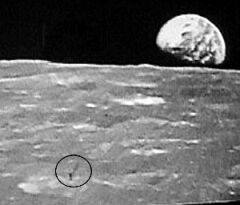 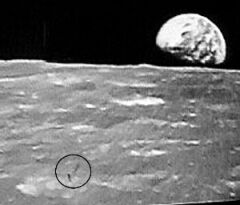 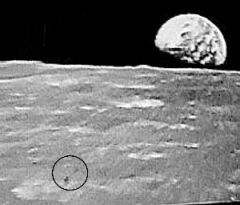 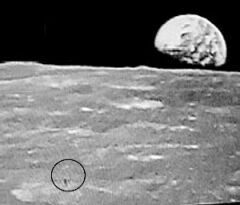 As you can see, the anomaly first appears near the center of the frame, then descends toward the lower left-hand corner as the camera moves forward. The additional color stills were sent to us by the publication.

Electric Space Craft increased the sharpness and contrast of the black and white pics to clarify the scene for printing (however, you can see the actual footage yourself if you purchase a copy of NOVA: To the Moon, on VHS or DVD).

The journal's Executive Editor (and former Apollo engineer), Charles A. Yost, said the anomaly is clearer on the VHS version due to digital compression for the DVD.

The object appears on screen for two seconds, and was not mentioned in the NOVA program.

It was apparently unnoticed until spotted by Electric Space Craft staff.

At first glance, the anomaly does not appear to be lint or debris on the film since it can be seen in many frames, changes as the camera's perspective is altered, and produces the inexplicable cloud-like form that drifts and vanishes.

After posting this information, our Discussion Board was overwhelmed with a firestorm of discussion and controversy.

Here are some new thoughts brought up by some Discussion Board participants:

1. In the fifth frame, right as it looks like the "smokestack" releases the "cloud," a small, black object, that looks like a projectile of some kind, can be seen in line with the "jet-like cloud." This caused some to speculate the anomaly could have been a firing weapon.

2. Other participants noted that a "cloud" on the moon would not drift in such a manner due to the moon's atmosphere.

3. However, the most interesting new information was presented by Phil Plait of www.BadAstronomy.com .

One of his board's participants said the footage isn't actually footage: he believes it is a still photo that NOVA zoomed into to create the illusion of motion.

If so, that would mean the anomaly was created by NOVA's camera, and was not on the moon.

Mr. Plait discovered an Apollo 8 photograph that seems to match the scene containing the anomaly.

Even though the photograph he found is overlaid nicely with the anomaly scene on his site, the image is highly pixilated and very poor quality when enlarged to the same size as our original frames, hindering an exact comparison. If anyone has a higher quality copy of this photograph, please send it to us for analysis.

* 2021 Note: To date, no one has ever sent us evidence that he or she reproduced this hypothetical effect *

Jay Windley of www.Clavius.org sent an email to Charles Yost detailing why he felt the explanation originally presented by Plait was correct.

Afterward, Yost said he also feels this is the correct explanation, and the mystery will be labeled as "solved" in the next issue of Electric Space Craft.

According to NASA, they did not have a color motion picture camera with a zoom on the Apollo 8 mission. The image in question shows clear evidence of a zoom. Therefore, unless there was a camera on-board that NASA kept secret, this zoom effect should not be seen.

There are people who claim NASA had lots of secret cameras on-board, but if so, then why did this "secret" footage fall into the hands of NOVA?

It is curious that zooming in on a photograph would create such a strange anomaly, and we'd love to hear thoughts on what the anomaly might be.

We have received emails from many who think the footage was either accidentally used, or slipped in by a subversive staff member of the program. They think NOVA and NASA are in cahoots!

Of course, those of that mindset would be virtually impossible to convince of a conventional explanation.

In 2006, L.E.M.U.R. learned from a NASA affiliate (whose connection to NASA was independently confirmed) that top NASA officials privately claim this footage is indeed legitimate. However, certain aspects related to this footage are highly classified, and the matter is under investigation.

There are some officials who want to publicly comment on this subject, but currently do not have clearance. If all this is indeed correct, what does this mean?

If the Apollo 8 footage shows a tall smokestack-like anomaly filmed in the 1960s, WHO put it there? And why should ANY footage from the moon be classified?

It was announced in January of 2006 that Russia plans to build a base on the moon by 2015 in order to mine the precious helium 3, a substance that facilitates nuclear fusion. There is enough on the moon to power the entire earth cleanly and efficiently for thousands of years. A single space shuttle load could power the United States for a year. Has the mining process already begun? And who is doing the mining?

"Helium 3 fusion energy may be the key to future space exploration and settlement," said Gerald Kulcinski, Director of the Fusion Technology Institute (FTI) at the University of Wisconsin at Madison.

"Helium 3 could be the cash crop for the moon," remarked Kulcinski, a longtime advocate and leading pioneer in the field, who envisions the moon becoming "the Hudson Bay Store of Earth."

Today helium 3 would have a cash value of $4 billion a ton in terms of its energy equivalent in oil, he estimates. "When the moon becomes an independent country, it will have something to trade."