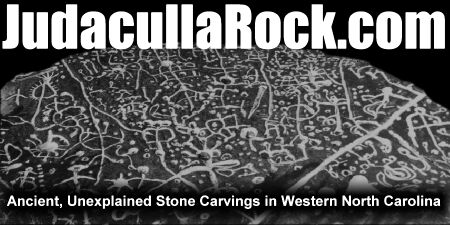 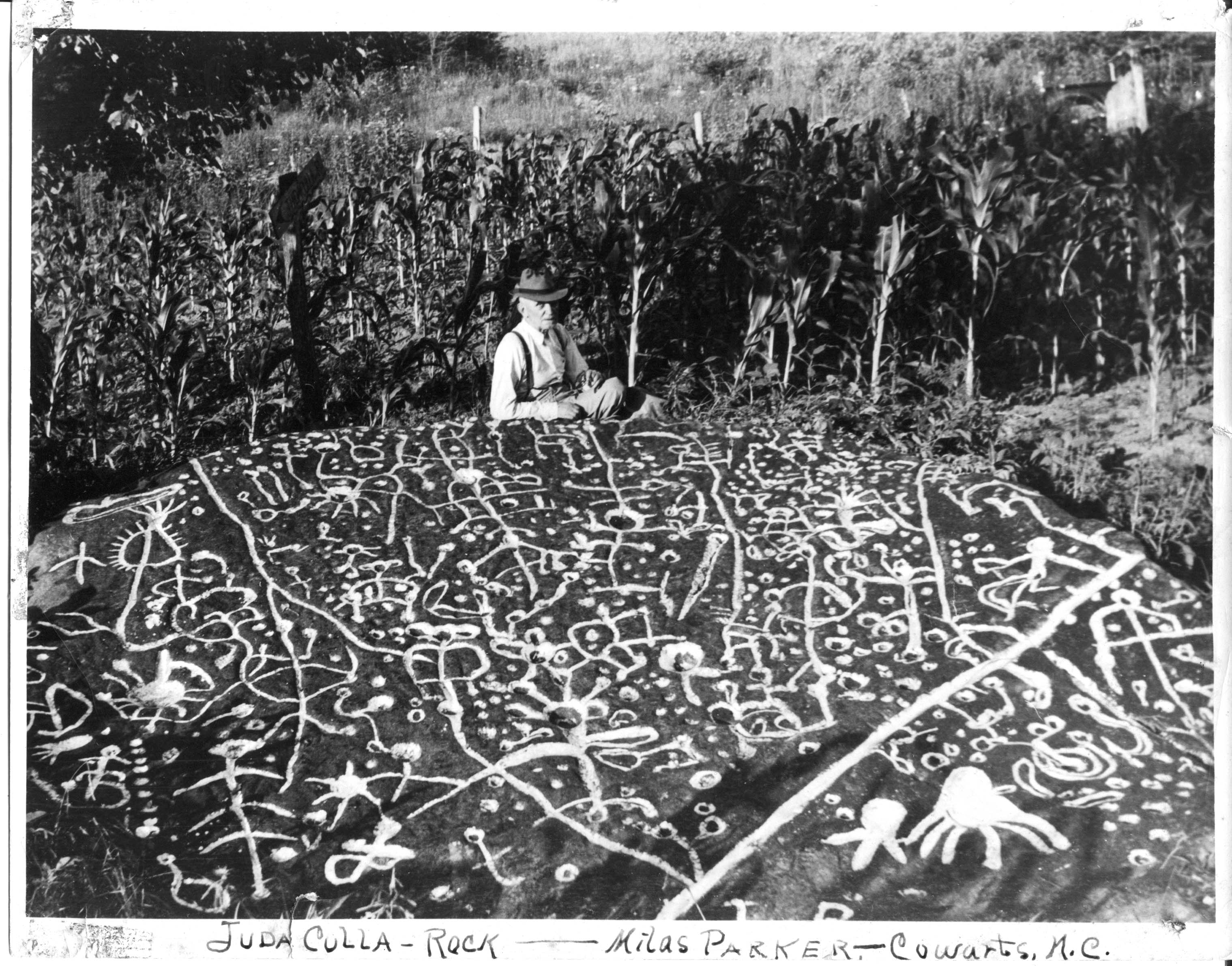 For this 1930s photo, the cryptic markings were filled with chalk. Since this valuable picture was made, the rock has continued to erode, making serious study increasingly difficult. Photo courtesy Jerry Parker

Deep in the mountains of Jackson County, just outside Sylva, North Carolina, sets a large, baffling stone. It is a soapstone boulder, and it's covered with a plethora of strange drawings that some archaeologists believe may be 2,000 to 3,000 years old.

Even the Cherokee Indians consider the site ancient, pre-dating their presence in the area. The rock has been studied by researchers across the world, but no one has ever deciphered the bizarre petroglyphs on the stone or figured out who made them. 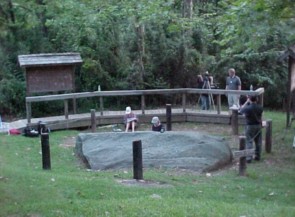 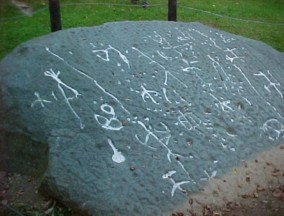 According to Cherokee legend, the markings on the rock were created by Judaculla, a slant-eyed giant who dominated the mountains in years long past. He was the "Great Lord of the hunt," a powerful being who could leap from one mountain to another, and even control the weather. They believed the rock not only marked his territory, but even bore his 7-fingered handprint, since he once used the rock to steady himself from a fall.

For many generations, the Indians treated the place as a sacred site. And, even in recent years, it was used in secret, late-night initiations by numerous student groups from the nearby Western Carolina University.

Amongst the student population, it's well-known that ceremonies at the rock have provoked many creepy incidents.

Ghostly noises are common at the site (especially considering it's only a few hundred feet from an old graveyard), and there are even reports of eerie illuminations around the stone and UFOs appearing in the clearing above it. All in all, it's widely known as a paranormal hot spot.

The stone sits at the base of a mountain, and a large vein of copper runs down under the site. The entire mountain is filled with a variety of metals and minerals. This layout can create detectable electromagnetic anomalies around the rock, and may have inspired ancients to consider the area sacred.

It seems Judaculla Rock is one of at least three other such stones on the same property. However, one of them was buried in a 20th century mining operation, and the other cannot be found, perhaps covered with vegetation or severely eroded. The visible relic is probably the tip of a vast iceberg. Considering the site has never been excavated, there's no telling what other ancient markings and artifacts may lie a short distance below the surrounding earth.

Everyone who sees the stone has a different theory about what the markings may mean. Some think it could be a map, a peace treaty, a battle plan, abstract religious symbols, simple story illustrations, antiquated graffiti, or a veritable Rosetta Stone of some kind, providing the key to unlock a new language. One of the strangest qualities is that, despite the number of markings, not a single one comes across as an immediately-recognizable image. However, most everyone agrees on one thing: this is a "special" place.

Unfortunately, due to weather and inconsiderate visitors, the rock is quickly eroding. Over the past century alone, the markings have become increasingly difficult to read. They are still clearly visible, though. While the markings can still be distinctly seen, you should visit this site and speculate on your own.

Judaculla Rock is now owned by Jackson County and can be visited during the day free of charge.